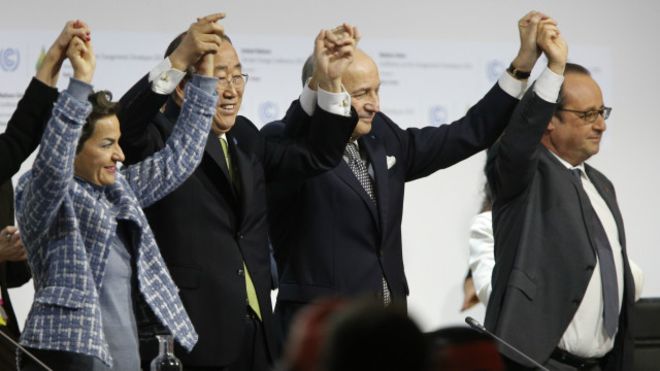 After two weeks of intense negotiations, the COP-21 (UN Climate Conference) ended Saturday in Paris with a historic agreement, which first involves nearly every country in the world in an effort to reduce carbon emissions and curb the effects of global warming. The centerpiece of the so-called Paris agreement, which will be valid from 2020, is the requirement for participation of all nations – and not just rich countries – in combating climate change. In all, 195 Member countries of the UN Climate Convention and the European Union have ratified the document.

The long-term goal of the agreement is to keep global warming “very much beneath 2ºC”. This is the point from which scientists claim that the planet would be condemned to a future of no return of devastating effects, such as sea level rise, extreme weather events (such as droughts, storms and floods) and lack of water and food.

In an ambitious reference, celebrated by environmentalists and least developed countries, the text refers to efforts to limit the temperature rise to 1.5ºC. It also sets that the points of the agreement will be reviewed every five years, to direct compliance with the temperature goal and give transparency to the actions of each country.

On the issue of climate financing, namely, who will pay the bill of the actions necessary for the success of the agreement, it was agreed that developed countries will pay US$ 100 billion a year in measures to combat climate change and adaptation in developing countries. Any additional injections of resources were set for 2025, reflecting the division that marked the discussions on this issue at COP-21.

“This represents a loss for developing countries, who wanted to see an indication of the post-2020 funding on the table in Paris. On the other hand, it represents a loss of position also for the developed ones, which threatened on Friday night to take the US$ 100 billion from the table if they could not increase the donor base to include emerging countries”, stated journalists Cláudio Ângelo and Cíntya Feitosa, who followed the Conference by Brazilian NGOs network Climate Observatory.

In a planned structure for US support to the agreement, only some elements of the document will be “legally binding”, in other words, will have the force of international law as the regulation of the UN Climate Convention, signed in 1992 in Rio de Janeiro. For other points, compliance will be voluntary.

This was the way out found on the finding that an agreement with mandatory emission reduction targets would hardly be approved by the US Senate, which has republican majority and strong opponents to the climate agenda of democratic president Barack Obama.

Therefore, the document does not bring concrete mentions to the emission reduction targets by country – virtually all of that part of the agreement shall be voluntary. Every nation must fulfil their national targets, the so-called INDCs, which follow what each Government considers feasible considering the local economic and social scenario.

Although they considered the historic agreement, environmentalists have made reservations regarding this point.

“The emissions cuts promised by countries now are still totally inadequate, but the agreement as a whole sends a strong message to entrepreneurs, investors and citizens: the energy now is clean and fossil fuels are over”, said the scientist Corinne Le Quere, Director of the Tyndall Centre for Climate Research, of England.

“The text essentially leaves in the hands of each country, voluntarily, the decision on extending the emission cutting actions and funding to the least developed countries. This will be feasible if countries keep the spirit of engagement which made Paris possible. But, if this will fail, we risk coming to 2030 in a trajectory of 3°C, something incompatible with civilization as we know it”, said Carlos Rittl, Executive Secretary of the Climate Observatory.

Brazil had an important role in the discussions at COP-21, mainly as a mediator of conversations with developing countries reluctant to certain points of the agreement, such as India and China. In the final stretch of the Conference, it joined the so-called “coalition of ambition”, a group of countries which acted behind the scenes for a more ambitious agreement.

The European Union and countries like USA, Mexico and Colombia integrate the group, in addition to the poorest and vulnerable to global warming countries. “It is an initiative made by the Marshall Islands (country threatened by the increase in the level of the oceans) that mobilized several countries so that we could make progress (in the talks) and stay below (the temperature increase) of 1.5°C and work together”, said Environment Minister Izabella Teixeira, to explain the participation.

The last hours of conversations – that included three nights in a row of negotiations – represented the summit of a four-year process to produce the first international pact limiting greenhouse gas emissions.

On Saturday morning plenary of the Conference, when the organizers presented the final proposal of agreement, the mood was festive, although the authorities have insisted on the need for approval by the delegates.

The Minister of External Relations of France, Laurent Fabius, said the new text represented a “turn” and featured a “differentiated agreement, fair, durable and legally binding”.

The President of France, Francois Hollande, said that “the final agreement for the planet” was “here and now”. And the UN Secretary General, Ban Ki-moon, summoned diplomats to “quit the job” because “the whole world was watching”.