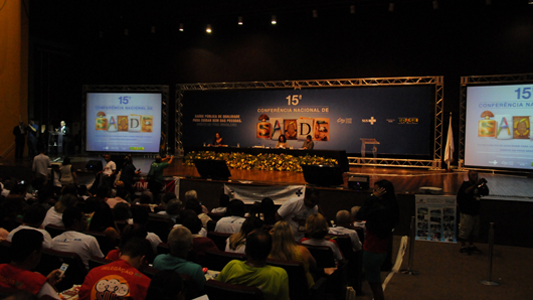 The President of Fiocruz also warned about the risk of schedules definitions in a planning of only four years and cited the program created by Fiocruz in partnerships with other institutions, the “Saúde Amanhã” (Health Tomorrow), featuring future surveys in the field of health, science and technology and demographics. “The prospect for the 2030´s shows that the number of seniors will double. They will be the majority in the population. These changes have immense repercussions on all the epidemiological pattern, disease burden and how healthcare should occur”, he said.

Microcephaly cases detected in recent weeks and confirmed by the Ministry of Health and by Fiocruz were cited by Paulo Gadelha to exemplify the importance of science, technology and innovation in the fight against diseases and the responsiveness capacity of the State. “By past experiences, zika circulated in areas with little population and with minor manifestations. So, the idea was that in Brazil it could go without major repercussions for public health. When the immense drama of microcephaly was associated with the zika, we started to search and there was evidence in the past of zika association with this problem. The findings and the actions that are taken from then are only possible because we have science and technology”, he explained.

The President of Fiocruz described as “brave new world” of personalized medicine, trends that can impact the model of care and the funding of SUS. It is genetic screening technologies to assess whether the person is likely to have a certain disease. “While there is a push in that direction, you put cost pressures and inequity about how the population will be able to receive these technologies”, he said.

On the industrial economic health complex associated with the idea of security and strategic autonomy in the country, Paulo Gadelha defended the central role of the State as an agent that causes an attraction between the public and private sectors, so that the national productive base necessary for SUS is adequate to the demands of the population”. Aids is an exemplary case, that meant, essentially, ability to produce in the country the anti-retroviral drugs to be universal and free given”, he recalled. Gadelha warned that in the case of oncology, which requires monoclonal biopharmaceuticals, drugs used to treat cancer.

“If we don’t have ability to develop here the monoclonal biopharmaceuticals, we will lose this war. And who will have access to it? The ones who have more money. Because SUS is not going to be able to do that because of a lack of a science- technology-production base”, he warned.

Paulo Gadelha also stressed the importance of social participation to direct the capacity of science, technology and innovation to the needs of the population. He presented data from a survey from the Center for Strategic Studies from Fiocruz which shows the great interest of the population in health and medicine. “We need the population to take ownership, be able to interfere, and that in many cases is co-producer of knowledge. If the population is not incorporated in the processes of policy development and co-production of knowledge, we will continue talking about a science not linked to society “, he commented.

At the end of his presentation, the President of Fiocruz criticized the National Congress and the fiscal adjustment, but did not fail to remember the advances achieved, as the Constitutional Amendment 85/15 and the Law of Biodiversity, mainly with respect to the allocation of benefits. “Oddly enough we had progress and this was only possible by the intense mobilization of people and institutions”, he said.

The importance of partnerships

Aligned to the speech of Gadelha, professor at UFSC Norberto Rech included the subject of patents in the debate and criticized the gap between academia, public policy and the health system, especially in the case of neglected diseases. “Research in products and innovation in this field is absolutely restricted, almost non-existent. When we look for the Academia, which should perform important research, it is turned back to this issue because there is no economic interest and no interest in terms of scientific production to count points in the curriculum”, he said.

Rech commented the fragility of SUS concerning monoclonal medicines for cancer which are under patent and defended public-private partnerships to tackle internal vulnerabilities. “Certainly it is not enough to have money to buy biological medicinal products or technologies of last generation to incorporate them to SUS. There is a clear need for a political decision to stimulate the development of these technologies with internalization of its production in Brazil. It will be on cooperation between public and private and in international cooperation”, he said.

Finally, Norberto Rech warned of the “threats that the system of science, technology and innovation suffers in the National Congress”. He called for all to position themselves against the Bill 200/2015, which deals with the resetting of the control system of ethics and research. “If this Bill is approved, it eliminates the possibility of social control of SUS to continue having definitions about the ethical parameters on definition and authorization of clinical research in the country. It is important that we make one see that the possible approval of this PL will make the clinical research in Brazil be serving more the interests of the market and less the interests of health. More the interests of international capital and less the interests of citizenship”, he said.