VI Cycle of Debates on Bioethics, Diplomacy and Public Health

The last session of the VI Cycle of Debates on Bioethics, Diplomacy and Public Health in 2015 will discuss the background and the future prospects of 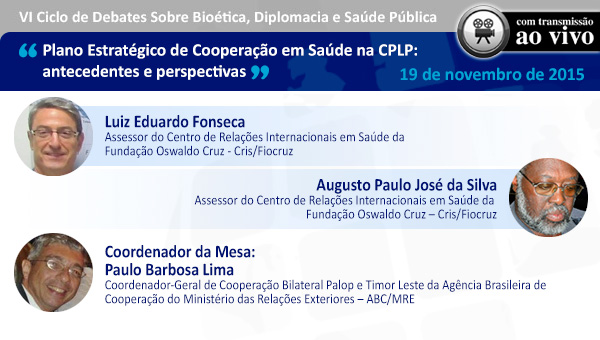 the Strategic Plan for Cooperation in Health (Pecs) from the Community of Portuguese-speaking Countries (CPLP). The debate happens on November 19th, at 8:30 am at Fiocruz Brasilia. The table will be conducted by Paul Barbosa Lima, General coordinator of Bilateral Cooperation Palop and East Timor at the Brazilian Cooperation Agency of the Ministry of External Relations (ABC/MRE). The speakers are the advisors of the Center for International Relations in Health (Cris/Fiocruz) Luiz Eduardo da Fonseca and Augusto Paulo Silva. The latter is also former Minister of Health of Guinea-Bissau.

There will be on line transmission, just click here on the day and time of the event . The Fiocruz Scool of Government will deliver a participation certificate only to the ones attending in person.

CPLP and Pecs – CPLP, created in 1996, represents a common political project to eight Portuguese-speaking countries: Brazil, East Timor, Portugal, Angola, Cape Verde, Guinea Bissau, Mozambique and São Tomé and Príncipe. The Community operates mainly in actions directed toward the strengthening of priority sectors of countries, such as health and education.

The actuation of CPLP in the health field refers to the Strategic Plan for Cooperation in Health of CPLP (Pecs/CPLP 2009-2012), whose goal is to strengthen the health systems of the Member States of the Community in order to universalise the access and improve the quality of healthcare provided their populations. The Pecs-CPLP was extended until 2016.

In accordance with the Plan, the following priority areas were defined: reducing child mortality, improving access to reproductive health and reduction of maternal mortality, fight against HIV, malaria, tuberculosis and other infectious diseases are endemic.

The advisors of Cris/Fiocruz will make an assessment on the whole period of Pecs and the prospects for 2016, because Fiocruz is one of the main Brazilian institutions to participate actively in the health cooperation with CPLP.

VI Cycle of Debates on Bioethics, Diplomacy and Public Health