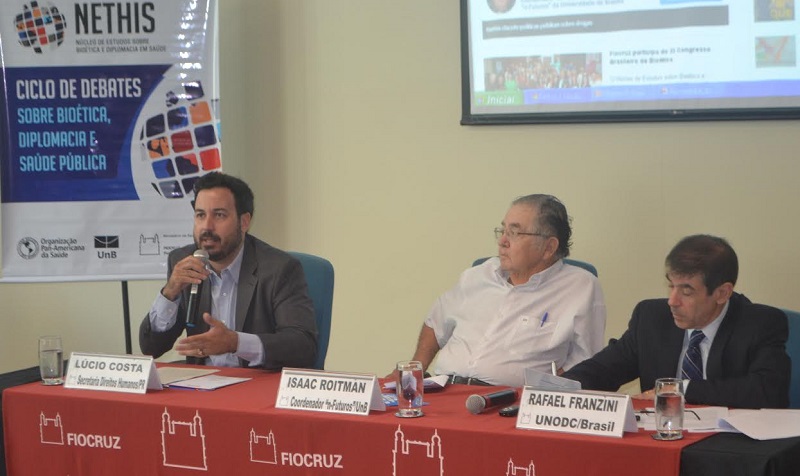 We must overcome racism to start discussing public policies on drugs. The speech is from the Coordinator-General of Human Rights and Mental Health of the Secretariat of Human Rights of the Presidency of the Republic, Lucio Costa, during the VI Cycle of Debates on Bioethics, Diplomacy and Public Health, on Thursday, September 24th, at Fiocruz Brasília. The roundtable, coordinated by the Coordinator of the Center for Studies of the Future at the University of Brasilia (n-Futuros/UnB), Isaac Roitman, was composed by the representative of the Office of Liaison and Partnership in Brazil of the United Nations Office on Drugs and Crime (UNODC/Brazil), Rafael Franzini.

Costa said that the social impact of drug policies is harmful to specific populations, such as in the case of occupations of the hills by the military, with serious consequences such as killings, harassment and abuse against women and intimidation of community communication agents from the slums, for example. “The logic of confrontation is the war on people and not on drugs. 70% of the imprisoned in Brazil are black or brown, this is the same population that represents 80% of the murders. The prison has color and address”, he said.

The extensive Brazilian border, with the major producers of drugs in the world, is one of the main challenges to combating trafficking, “doomed to fail”, warned the representative of the Secretariat of Human Rights of the Presidency of the Republic. The United States spent, in 3 thousand kilometers of border, more than 1 billion dollars, which did not prevent the marketing of the drug in the country.

The representative of the Office of Liaison and Partnership in Brazil of the United Nations Office on Drugs and Crime (UNODC/Brazil), Rafael Franzini, began his lecture with opposition to the term “war on drugs”. “In a war we assume that someone wins and someone loses, it’s not the case, we have progress and setbacks”, said Franzini.

In 2016, the theme of the United Nations General Assembly will be drugs, with the intention to implement a Global Action Plan of combat until 2019. “It would be more effective if all countries decided by the same strategies”, says the representative of UNODC Brazil. Currently, the global drugs market moves approximately 322 billion dollars a year.

Franzini cited the three Conventions on Drugs (see here), and pointed out that none of them criminalises consumers. “There are international laws, but the countries adopt their own laws, including the signatories”, he said. In Brazil, for example, the police officer is the one who decides what is a crime and what is consumption. “Every public policy must be illuminated by Human Rights”, concludes.

The VI Cycle of Debates on Bioethics, Diplomacy and Public Health is organized by the Center for Bioethics and Diplomacy Studies in Health (Nethis) at Fiocruz Brasília.