Social movements are doing demonstration against pesticide use in agribusiness

In the International Day of Fight Against the Pesticides, on December 3rd, social movements held a demonstration to denounce the harms to health caused by the intensive use of poisons by Brazilian agribusiness. The demonstration, held in front of the pavilion where it is being held the 15th National Conference on Health, brought together hundreds of activists of social movements. Protesters organized the 1st National Meeting of Public Health of the Field, Forest and Water, held as a counterpoint to the 15th CNS, in the City Park, in Brasilia.

According to the organizers, the act was aimed at denouncing the indiscriminate use of agrochemicals and their consequences, such as genetic malformation and microcephaly, but also to protest against attempts at commodification of health in Brazil and in Latin America and against the privatization of the Unified Health System (SUS). According to the organization, the act also sought dialogue with the delegates at the Conference about the importance of the social determination of health-disease process and to question the lack of space given to the demands of popular movements in the spaces of social control. 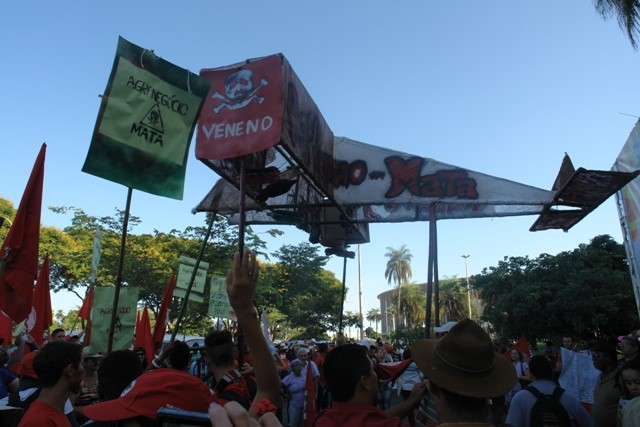 “We want to make termination of the agribusiness model and tell the delegates what the consequences of the use of pesticides on health and on the environment are. The discussion of health must be for a discussion on nutrition and, in that sense, we are making the complaint of pesticides, which is one of the things that most kills today in Brazil. It is already well documented in surveys, as showed the Dossier of Abrasco on Pesticides”, said Judite da Rocha,from the movement of Dam Affected People (MAB). “This conference space, as it is built, excludes people of the countryside, forests and waters. We want another form of social control for our claims and our proposals to be heard”, she charged.

“Agribusiness kills”, “Agribusiness only brings problems, we want peasant farming agribusiness” and ” agribusiness + microcephaly = death” were some of the messages printed on posters carried by the demonstrators. One protester carried a sign in what he called the Minister of Agriculture, Kátia Abreu, the “queen of destruction”.

But the great target of the protest was without doubt the President of the Chamber of Deputies, Eduardo Cunha (PMDB-RJ), which a day earlier had accepted the opening of impeachment process against President Dilma Rousseff. “Cunha out” was the rallying cry more often heard during the act. On posters, messages such as “Ministry of Health warns: Cunha is bad for health” and “Cunha = end of SUS”. “We continue to defend the permanence of the President and in defense of democracy. If we look at who brought the impeachment is a person who shouldn’t even be in this space. Also today we’re here saying that the way Congress is being driven does not bring us anything good”, assessed Judite.