South-South cooperation, economic-industrial complex of health and bioethics were the themes of the V Cycle of Debates, promoted by the Center for Bioethics and Diplomacy Studies in Health (Nethis/Fiocruz) in partnership with Fiocruz Ceará and with the Government of the State of Ceará. The event took place on November 24th, in the Auditorium of the School of Public Health of the Secretariat of the State in Health of Ceará in Fortaleza.

Paranaguá Santana, and the researcher of the Ipea, John Brígido. Paranaguá drew attention to the importance of addressing this discussion in the institutional context of the State of Ceará, in order to promote reflection on issues linked to inequalities and development, associated with the practices of international cooperation.

The researcher of the Vice Presidency of Production and Innovation in Health (VPPIS/Fiocruz) Sandra Soares, designated representative of the Secretary of Science Technology and Strategic Inputs from the Ministry of Health, Carlos Gadelha, initiated the day of lectures. Sandra presented the economic-industrial complex of health (CEIS) in the context of the external cooperation of Brazil. See the presentation here.

The project coordinator of Brazilian International Development Cooperation (Cobradi/Ipea), John Brígido Bezerra Lima, presented an analysis of the Brazil-Africa cooperation between 2011 and 2013. The presentation is part of the work developed by Ipea with the Cobradi Annual Report which aims to promote and give greater transparency to the actions of the Brazilian international cooperation.

In the afternoon, the Coordinator of Assessories at Fiocruz Brasilia, José Agenor Álvares, led the Panel “South-South Cooperation: the challenge of inequalities in the context of international relations“. In this session, the Director of Fiocruz Ceará, Antonio Carlile Lavor, told about his work in Africa, between 2007 and 2008, with the deployment of communitarian agents of health in Luanda and between February and September 2014, with construction of the National Policy for Community Development and Sanitary Agents, with consultants of the Ministry of Health of Angola. After the presentation, Carlile showed the documentary “Angola with us”, access here.

The Dean of the University of International Integration of Afro-Brazilian Lusophony (Unilab), Nilma Lino Gomes, presented the institutional project of Unilab in the context of the cooperation between Brazil and the members of the Community of Portuguese-speaking countries. Access here. 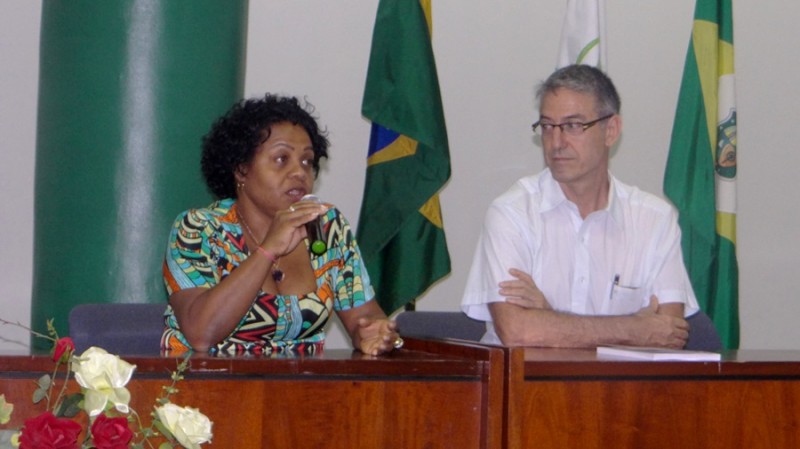 The coordinator of Palin/Fiocruz Brasília, Denise Oliveira, and the advisor for Africa from Cris/Fiocruz, Luiz Eduardo Fonseca.

BOOK – after the debates, the Advisor for Africa of the Center for International Relations in Health (Cris/Fiocruz), Luiz Eduardo Fonseca, launched the book “Food and nutritional security in the community of the Portuguese-speaking countries: challenges and perspectives”. The Food, Nutrition and Culture Program coordinator (Palin/DIREB), Denise de Oliveira e Silva, also attended the launching, when he stressed the relevance of the topic in the context of transition from eating patterns, both in Brazil and in African countries. Copies of the work were distributed to those present.

The Cycle of Debates on Bioethics, Diplomacy and Public Health aims to promote the thinking, debate and development of interdisciplinary scientific studies. In 2014, the Cycle completed five years, with monthly periodicity, held always on the last Thursday of the month. In each session, renowned researchers and managers from the fields of bioethics, public health and international relations are invited to lead the discussions.