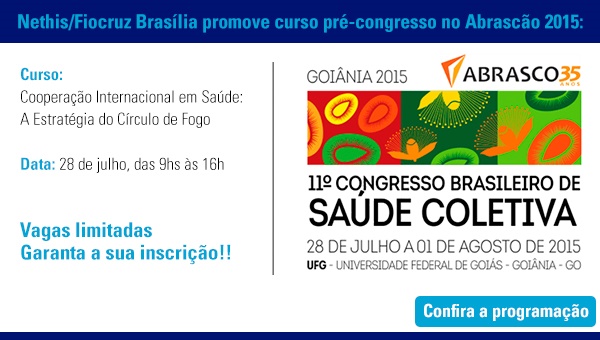 The 11th Brazilian Congress of Public Health, Abrascão 2015, is already with registration opened for the course International Cooperation in Health: the Strategy of the Ring of Fire, coordinated by the Center for Bioethics and Diplomacy Studies in Health (Nethis/Fiocruz), as part of the pre-Conference activities, day July 28th , at the Federal University of Goiás, Goiânia. Make your registration and check out more details at this link .

Soon after the lectures, there will be debate with the participants. The course will be held from 9 am to 4 pm, in room Aroeira-203-A18.

The course objective is to provide a critical analysis of health conditions in the world on the policies and practices of development and cooperation between countries. The Coordinator of the course and of Nethis, José Paranaguá Santana, explains that two issues represent the starting point: How the scientific and technological development and innovation influence the inequalities between countries, in terms of health conditions and well-being? and if such inequalities can be eased with international cooperation?

“The economic, scientific and technological power is an arena of contest between countries, which involves large private companies of medicines, food and other products for human use. The different capacities of the countries in these fields are linked to inequality between them and simultaneously constitute justification for international cooperation”, says Paranaguá.

The historical background of the situation between the second world war and the present day will also be discussed, as well as the indication of the responsibility of States in regulating development processes associated with health inequalities in the international context. The assumption adopted is that the State must act as legitimate representative of the interests of society in the control of the production, dissemination and consumption of products and services, both those that are indispensable to tackle diseases as those harmful to health and welfare of individuals and collectivities – drugs, immunobiologicals, food, beverages, tobacco, pesticides, among others.