The Center for Bioethics and Diplomacy Studies in Health (Nethis/Fiocruz) calls for the V Cycle of Debates on “South-South Cooperation, economic-industrial complex of health and bioethics”. It will be on November 24th, from 8:30 on, in the Auditorium of the School of Public Health of the Secretariat of Health of the State of Ceará in Fortaleza.

Make your registration HERE and access the schedule  HERE.

After the opening table, with representatives from various institutions, the opening lecture will be with the Center Coordinator, José Paranaguá Santana, with the theme “South-South Cooperation, economic-industrial complex of health and bioethics“. The President of Fiocruz, Paulo Gadelha, will coordinate the Panel “Economic-industrial Complex of health: ambivalences and possibilities for South-South cooperation”.

Also participating as panellists are the Secretary of science, technology and strategic inputs from the Ministry of Health and researcher at Fiocruz, Carlos Gadelha, the Brazilian Cooperation for international development Project Coordinator (Cobradi/Ipea), John Brígido Bezerra Lima, and Professor at the Institute of international relations of the University of São Paulo and member of the Board of the Brazilian Association of international relations (ABRI), Deisy Ventura.

In the afternoon, the Coordinator of Assessories at Fiocruz Brasilia, José Agenor Álvares, will coordinate the Panel “South-South Cooperation: the challenge of inequalities in the context of international relations“. Also participating as panellists are the Dean of the University of international integration of Afro-Brazilian Lusophony (Unilab), Nilma Lino Gomes, the Vice President of education, information and communication at Fiocruz, Nísia Trindade Lima and the Director of Fiocruz Ceará, Antonio Carlile.

BOOK – After the debates, there will be the release of the book “Food and nutritional security in the Community of the Portuguese-speaking countries: challenges and prospects”, organized by the Centre for international relations in health (Cris/Fiocruz) researcher Luiz Eduardo Fonseca. Besides Fonseca, the program coordinator of Food,
Nutrition and Culture (Palin/Fiocruz Brasília), Denise de Oliveira e Silva, will participate in the event.

The Cycle of Debates is held in partnership with Fiocruz Ceará, the University of international integration of Afro-Brazilian Lusophony (Unilab) and the Secretariat of health of the Government of the State of Ceará. 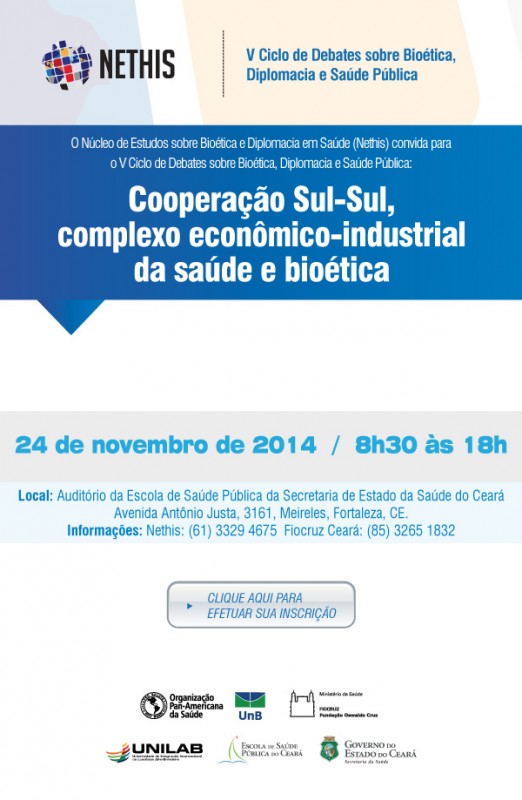