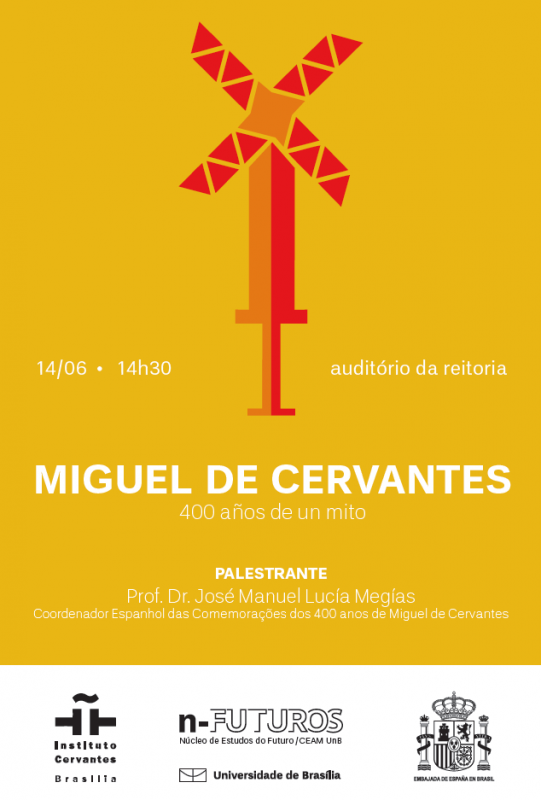 The Center for the Studies of the Future of the University of Brasilia (n-Futuros/UnB) invites to the event “Miguel de Cervantes – 400 years of a myth”, which will be held on June 14th, in the Auditorium of the Rectory at 2:30 pm. The lecturer is professor José Manuel Lucia Megías, Professor of Romantic Philology at the Complutense University of Madrid, Honorary President of the Association of Cervantists and Spanish Coordinator of the celebrations of 400 years of Miguel de Cervantes. The title of the lecture of Megías is: “The man Miguel Cervantes and the 400 years of his death”.

“We are bringing an important personality of Spain, considered the best specialist in Cervantes”, emphasizes the Coordinator of n-futuros/UnB, Isaac Roitman.

MIGUEL CERVANTES – The Spanish writer was born in Alcalá de Henares in Spain, in 1547. In 1584, he wrote the pastoral verse Galateia. Later, he wrote about twenty plays, among them The life in Algiers and Numancia. In 1605, he published the first part of Don Quixote de La Mancha, which in a short time, 30000 copies were sold. However, the author would come to conclude this work ten years later. Cervantes left still, among other works, the Novelas ejemplares (1612), a collection of short stories; Trip to Parnaso (1614), magazine of the poets of the time; Persiles and Sigismunda (1617), romance full of eccentricities, and several comedies, among which stand out the labyrinth of love, the brave Spanish and the judge of divorces.

For the event, n-futuros/UnB counts on the partnership of the Embassy of Spain in Brazil and the Instituto Cervantes of Brasília.