MH Executive Secretary and Coordinator of Nethis are awarded in Piauí 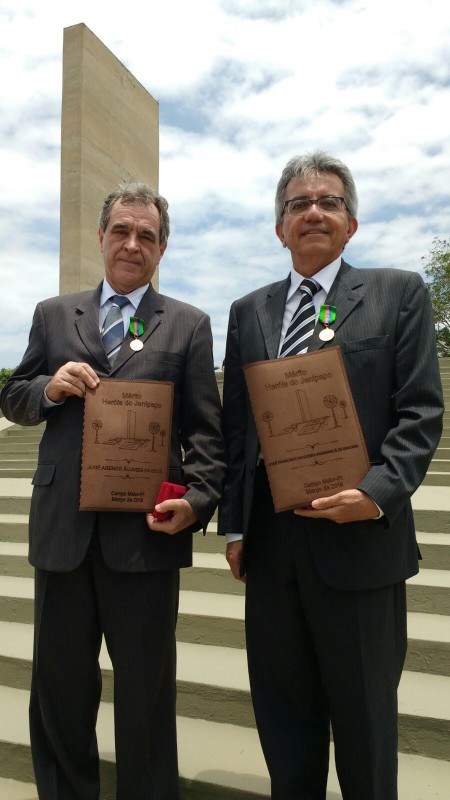 The city of Campo Maior, in Piauí, granted to the Executive Secretary of the Ministry of Health, José Agenor Álvares, and the Coordinator of Nethis/Fiocruz Brasilia, José Paranaguá de Santana, the Municipal Order of Merit Heroes of Jenipapo, in a ceremony last Sunday, March 13th. The Commandery is a recognition to the personalities and entities who stood out for their contribution to the development and progress of the Campo Maior community.

BATTLE of JENIPAPO – the Battle of Jenipapo, held on March 13th 1823, is considered essential in the process of independence of Brazil. On the banks of the river Jenipapo in Campo Maior, in Piauí, citizens of Piauí, Maranhão and Ceará fought against Portuguese troops led by major João José Cunha Fidié. The Brazilians lost the battle because they did not possess weapons of war, but they did divert troops from the target and thus ensured the Brazilian territory. The Portuguese troops followed to Caxias in Maranhão, and were defeated on July 31st 1831.

AWARD RECIPIENTS – José Agenor Álvares is Executive Secretary of the Ministry of Health, was Minister of Health and Chief Executive of the National Health Surveillance Agency (Anvisa). Alvares was Advisor to Fiocruz Brasilia in recent years. For his role in the regulation of tobacco products, the World Health Organization (WHO) has conferred him the award of “World No Tobacco Day”, in 2012. In 2015, he was given the title of Notorious Knowledge in Public Policies in Health, at the Fiocruz School of Government.

José Paranaguá de Santana is coordinator of Nethis/Fiocruz Brasilia, was a consultant of the Pan American Health Organization, program coordinator of technical cooperation in Human Resources Development and responsible for the coordination of International Health Cooperation Agreement between the Ministry of Health, PAHO and Oswaldo Cruz Foundation (Fiocruz). In 2009, he was awarded with the Oswaldo Cruz Medal of Merit in the Gold category by Presidential Decree.