President Dilma Rousseff met this Sunday (27th), in New York, the couple Bill and Melinda Gates, from the Gates Foundation, to discuss partnership with views to the Summit “Nutrition for Growth”, which will take place in Brazil next year, and will have as theme issues related to healthy eating. 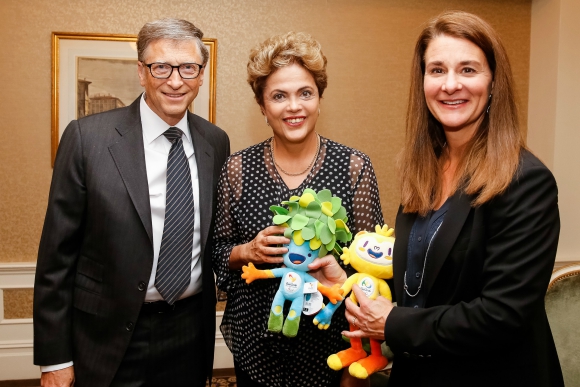 According to the Minister of Social Development and Hunger Alleviation, Tereza Campello, who also attended the meeting, Brazil is a world reference not only as a country that has overcome hunger, but as a country improving eating habits.

“We have important experience in school feeding and Brazilian good practices will be the keynote of this Summit that we are organizing,” said the Minister.

The possibility of a joint cooperation to Africa was also on the agenda of the meeting. Bill and Melinda Gates Foundation already has a work dealing with the issue of nutrition and vaccines for children, and Brazil also has important action with African countries. According to Campello, the efforts may be added to enhance the cooperation and help Africa to continue advancing.

President Dilma took the opportunity to invite Bill and Melinda to be at the Rio 2016 Olympic Games, and gave them Tom and Vinícius mascots.

Gates Foundation
The focus of the non-profit organization, based in the United States, is to reduce the gap between rich countries and poor, having among its objectives the eradication of malaria and polio, as well as the control of the spread of tuberculosis and HIV virus.

Source: Blog Planalto of the Presidency of the Republic