“Paradoxes of South-South cooperation in health”

The world health landscape is characterized by difficulties of access to goods and services, as well as deficiencies in the quality and effectiveness of health systems actions. These characteristics affect especially portions of the population of poor countries that, besides the economic shortages, suffer the precariousness of other social sectors. Even in rich countries, such problems afflict markedly poorer segments of society, both those who gather on the urban areas as those who live in remote or scattered areas. In almost all countries, it has become increasingly more severe the consequences of non-rational incorporation of technological innovations.

Another feature of this scenario in historical perspective is the paradoxical contrast between the living conditions of mankind and scientific, technological and global economic advancement. Such progress has deepened the inequality between those who have access to the benefits of development and those facing more with their burden.

In this sense, the public policies of international cooperation in health should adopt ethical values indispensable for the development of countries, particularly where the health situation reveals economic iniquities and social injustices. Nevertheless, international cooperation reflects predominantly the interests of a diverse order of the most powerful countries on those deemed “beneficiaries” of foreign aid. Thereby, international solidarity has contributed, paradoxically, to the prevalence of poverty and inequality precisely in those areas where cooperation should contribute to the overcoming of this reality.

In this context arose the movement of South-South cooperation, as a “new” paradigm that aims at overcoming these conflicts and the strengthening of the South front of the dependence on the North. However, South-South cooperation can be treated just like another strategy or tool for the unbalanced power accumulation of national States in the global system.

The proposal of the course meets the need for deepening reflection, between the academic community and the public policy formulators/executors, about the increasing importance of these processes in the context of international relations, particularly where bioethical issues linked to methods, operations and results of the initiatives of cooperation between countries are highlighted.

Date of implementation: March 17 to 21, 2014
Distribution of Workload:
WL of the course: 40 h
Classroom activities: 28 h
Activities at distance: 12h

For the issuing of the certificate of completion of the training course by the Academic Secretariat of the School of Government in Health of Fiocruz Brasilia, it is necessary to the fulfilment of at least 75% of the total workload of the course.

In the first session, students will have the opportunity to introduce themselves and receive general instructions about the course development (distribution of workload, availability of didactic material and schedule).

The duration of the classes is planned to last 1h, included the phase of discussion and clarification with the professor.

The 12h reserved for activities at distance (afternoon of first three days) will be for the preparatory workshops, according to guidance given at the opening of the course. 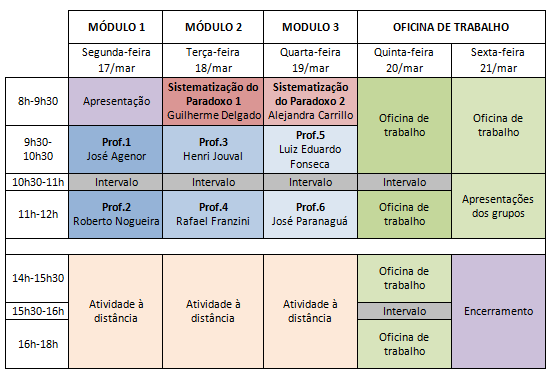