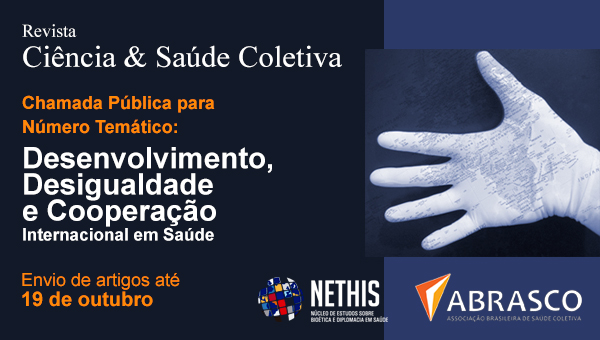 The Ciência & Saúde Coletiva Magazine, published by the Brazilian Association of Public Health (Abrasco), has opened a public call to receive articles about Development, Inequality and International Cooperation until October 19th 2016. The thematic issue will be done in partnership with the Center for Bioethics and Diplomacy Studies in Health (Nethis/Fiocruz). The guest editor is the Coordinator of the Center, José Paranaguá de Santana. Those interested in publishing should send the articles in accordance with the standards of the magazine, to the email nethis.publica@gmail.com.

The thematic issue is opened for texts in four keys of approaches:

 The meaning of health in the current context of the United Nations; the criticism to this institutional meaning, with a classic focus on causality of diseases, often hidden under the expression of health determinants; the understanding of social justice and equity in health that considers the duration of human capabilities limitations and of freedom as a health problem; the recognition of health as a fundamental human right, which translates into social right and inserts itself in State public policies;

 The understanding of health regulation promoted by the State in defence of the general interest, capable of acting on the control of the entire chain of production, distribution and consumption of goods and services, both those that are indispensable for combating diseases, such as those detrimental to health and those who encourage or promote the welfare of individuals and collectivities; the analysis of strategies, tools and experiences of health regulation in tackling the problems of health in a globalized world, that require international State action in certain areas of strong connection with the genesis of these problems;

 The recognition on the connection between health regulation and the expanded notion social responsibility that aims to alter the pathogenic chain linking industry and worker-consumer citizen, ranging from the production of certain commodities to the content of advertising messages of these products; the importance of this agenda as of fundamental interest for the whole society and, therefore, that this debate should expand beyond the academic bodies, the bureaucratic apparatus of the State and, firstly, of industrial and financial sectors; the challenges for communication and its ambivalence on the release-domination dynamic between actors of these different fields of interest; the questioning and the revision of concepts, strategies and tools able to motivate the interest and the mobilizing of broad social segments around health demands in the international context.