On the first official day of the 11th Brazilian Congress of Public Health – Abrascão 2015, on Samambaia campus, in the Federal University of Goiás (UFG), Goiânia, Carlos Medicis Morel, Coordinator of the Health Technology Development Center (CDTS/Fiocruz) spoke about the Autonomy and Dependency of Brazil on Science, Technology and Innovation in health. Access the presentation here. 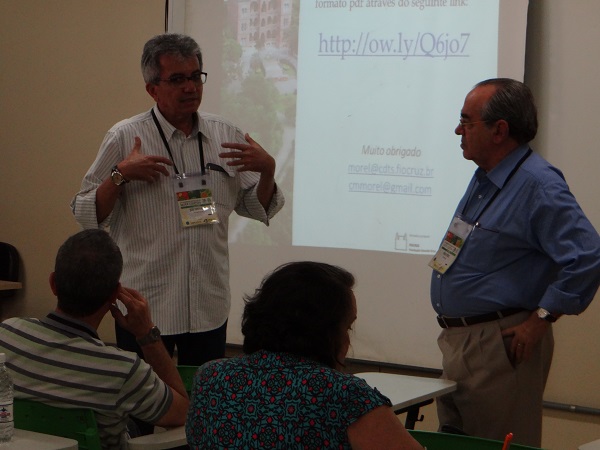 José Paranaguá Santana, researcher of the Center for Bioethics and Diplomacy Studies in Health (Nethis/Fiocruz) coordinated the activity and pointed out at the opening of the work the importance of cooperation in the field of science. “We must propose working together, and cooperation is of paramount importance to the scientific and social evolution”.

Carlos Morel began his lecture questioning: to whom is science made in Brazil? According to Morel, his words were given due to the fact that the Brazilian bureaucracy is still an impediment to the production and scientific and technological innovation in the country. “We must change the way science is evaluated in Brazil. The rewording is necessary to our growth. We have excellent brains, laboratories, universities and research institutions. However, we do not have the main factor, innovation”, said Morel.

The speaker pointed out the need to strengthen State as an entrepreneur and promoter of the research, articles, patents and technological innovations. Integrated platforms between research centers and other forms of collaborative production, known to be effective and commonly used by major developers of research, patents and health technology in the world, are not yet part of the reality of the Brazilian scientific production. “Who does science in Brazil doesn’t make technology and vice versa. We have a number of researchers working on the same scope, but few have signed partnerships. We have to innovate, networking, i.e. use all knowledge, explicit or not. For that, we must unite the different fields and specialties”.

By Rafael Avelino from Abrasco.