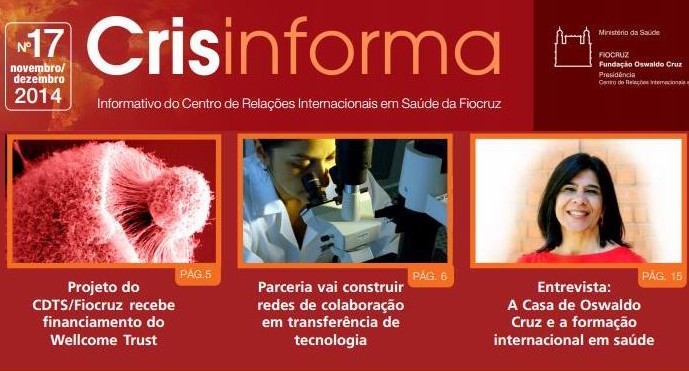 In its 17th Edition, Crisinforma brings as a feature the Unasur seminar on the fight against the epidemic of Ebola, which brought together representatives of the Ministry of Health and National Institutes of Health of Latin American countries in the search for solutions to combating the disease in the region of the Americas.

Also gained space in this number a promising initiative to combat meningitis that affects immunocompromised patients, which has just been approved to receive resources from the finance company British Wellcome Trust.  the agreement signed with the University Hochschule Furtwangen, of Germany, was addressed as well, for the creation of networks of cooperation in technology transfer, and the lecture given by a professor at the University of New Delhi, Raman Vankat, on innovation to reduce inequalities in health.

The interview is with the Deputy Director of Research, Education and Scientific Dissemination of the Casa de Oswaldo Cruz (COC), Magali Romero Sá, on a new project in international health training led by unit.